Cuneiform's third release from this landmark band, a South African band that dared to be integrated in a time of apartheid and had to leave the country because of it. This album includes a concert of continuous music, about an hour long, that weaves from one composition to another, packing the time with ebulliant free jazz. These guys were great at producing a sense of abandon while showing they could still steer the ship.

Derek Bailey teamed up with a drum machine, trying out the drum-and-bass thing I guess. Not sure if that was his idea or someone else's. The results are mixed, although part of that is my reaction of ennui to drum-'n'-bass in general. What you often get is the sound of some drum machine going nuts, with Bailey playing as if he's in some other room. By now, of course, the drum machines like the one used here sound terribly dated, so that's another strike. Interesting idea worth trying once, and worth putting on the air once.

Noted here, or look in horror upon this playlist.

More cool stuff from the Japanese shamisen duo that was mentioned here.

What sound like improvisations from a pair of acoustic guitarists, either or both of whom pick up percussion implements here and there for a variety of sounds. It's got an organic feel, due to being all-acoustic, and the guitars bring in a touch of abstrct world music, if that makes any sense.

Good stuff, but not my cup of tea; I played it because she's doing a CD release concert at Yoshi's Oakland next week.

Spalding is a very talented bassist and vocalist with a mature sound for being just 23 years old. Her debut album, while being very mainstream, caught my ear for its Latin licks and some tricky, playful bass playing on a couple of tracks. Those influences aren't absent here, but they're downplayed in favor of contemporary vocal tracks heavy on piano, for a candlelight cocktail-jazz feel. Songs and lyrics take center stage. I liked the wordless vocal pieces the best, and "If That's True," an instrumental with sax and trumpet solos, is a particular highlight.

This is no Norah Jones "crossover" experiment. The songs are all clearly jazz, just a staid and comforting type of jazz. That said, there's variety on here. The opening "Ponta de Areia" features some funk ideas and retro-girly "ahhhh" vocals. "Precious" introduced some R&B mellowness, and "Sambe Em Prelude" is a duet with Spanish guitar. The CD is likely to get some play on smooth jazz stations although there's nothing "smooth" or electronic about it -- and for that last part, I'm deeply grateful.

By the way -- I played two tracks because after talking up that non-Norah Jones argument on the air, I launched what happens to be an instrumental. 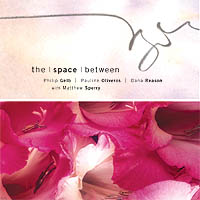 The Space Between is a sublime improvising group consisting of Philip Gelb (shakuhachi, the Japanese wooden flute), Pauline Oliveros (accordion), and Dana Reason (piano), often with an added guest. In this case, it was the late Matthew Sperry, the bassist whose memory was being celebrated this week with a Memorial Festival.

I'd forgotten about this CD, which consists of two long pieces named after Sperry's wife and daughter. It was released posthumously as a farewell letter -- hence the soft floral cover. It's a touching tribute.

Indian classical singing with small-combo backing. There's a multitude of Indian musical styles that my ear can't yet distinguish, but this stuff has a proud, regal air while still tapping the rhythms familiar in most Indian music.

Apparently she shows up on the new William Parker album on AUM Fidelity. To quote the excellent Free Jazz blog by Stef:

The most special thing is the presence of Indian singer Sangeeta Bandyopadhyay, whose singing soars over this band like a bird over the jungle, with long microtonal shades and nuances, full of joy and emotion, full of rhythm and sadness. It is not only stunning, it is also absolutely unique.

I had no idea. (And you'll note that blog was filed weeks after this show aired.) So I'll be looking forward to hearing that one.