While I can't say I know much about Bill Dixon's work, the few things I've heard stand out. They've got controversy brewed into them. This is maybe less true on his recent album with Rob Mazurek's Exploding Star Orchestra, but the Dixon touch is still there, as the Exploding Star becomes a long-tail fade, a celebration of process and the joy to be found in raw existance -- as opposed to free-jazz head-cutting.

I seem to recall there's a similar vibe to the Berlin Abbozzi CD that's in our library. That album lacks the influence and backing of the dynamic E.S.O., though, and I remember having trouble with it. (I'll have to revisit it now.) Dixon's own playing focuses more on sounds than conventional notes. Plenty of "jazz" improvisers do that. But his albums have the feel of deeper goals than that; they're meant to sound different, and they come across as even more difficult than your usual sonic-exploration projects. It's a fingerprint from which the music is built.

Dixon's real hornet's-nest moment came in 2002 at the Victo festival, more properly called the Festival International Musique Actuelle (FIMAV). Intentionally or not, he got the crowd's dander up, opening questions about what happens when even a beloved artist's goals clash with the audience's. 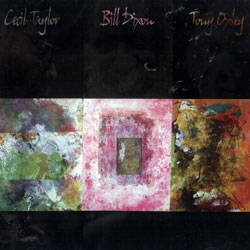 Anticipation was high for a set combining Dixon with Cecil Taylor and drummer Tony Oxley. As 2/3 of The Feel Trio, Taylor and Oxley were well known for long stretches of fast, intense patter, taking listeners on a canoeing trip down hot-lava rapids. Exciting stuff.

This show didn't work out that way. First, Dixon held a press confererence, "bitterly assailing critics and Canada herself for not bringing him up earlier." Then his set with Taylor and Oxley started an hour late.

Then the real trouble began. Dixon, on trumpet and electronics, laid down a slow, minimal creeping that defined the entire set. Taylor and Oxley followed suit. After less than an hour -- and remember, Cecil Taylor albums routinely document live sets stretching to 70 or 80 minutes -- it was done.

The audience was bitter, and I can recall some message-board chatter over whether they'd been ripped off, and whether it was all Dixon's fault. It wasn't just the slowness, quietness, and lateness that people didn't like -- fans of this music can appreciate that stuff -- but a supposed lack of cohesion among the players, singling out Dixon as the one they thought didn't want to join the others. And this was before blogs were a big deal (or even called "blogs"); imagine the kind of Obama-fist-pump uproar there'd be today.

By the end of 2002, it looked like history would side with Dixon. Victo released the set on CD and got some sympathetic reviews: "This concert has many of these moments, Taylor's customary cascades swelling out of the expectant calm like titans only to disappear again." (Bagatellen). Journalist and Atavistic proprietor Kurt Gottschalk had his doubts after attending Victo but warmed up to the concert after re-hearing it on CD. And the Downtown Music Gallery guys seem to have liked the concert in the first place.

I've yet to hear the album. Maybe it's time I picked up a copy.

My point is, Bill Dixon isn't regular free jazz, and even though I'm more than comfortable with abstract, nonmusical improvisation, I'm not always able to click with his music. I can't decide if I just don't get Dixon yet or if I inherently don't like the music. 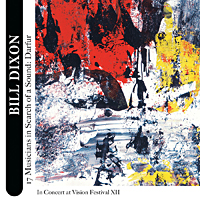 17 Musicians In Search Of A Sound: Darfur -- Dixon's latest album, on AUM Fidelity -- is not dominated by the ear-shattering silence of the Victo set. I do get that sense of process again, although the Darfur pieces do seem to have a deeper compositional element than the other Dixon projects I've heard.

A few recurring themes define the album-length suite. The themes might not be recurring note-for-note, but the overall sound is revisited -- specifically, I'm thinking of the surge of deep bowed basses that opens multiple tracks, including four short ones near the end. It's a clarion call that's alarming and yet mourning (words that I'm not sure even go together). That sound is characteristic of the whole project: dark, challenging, heavy work. Dixon is one of four cornet/trumpet/flugelhorn players in the group, and my ear can't single him out -- but his real contribution is in conducting, steering this ocean liner of a sound. There are substantial segments of faster-paced group improv, the normal scribbly stuff you'll often hear on my radio show, but the prevailing heavy atmosphere blankets the suite.

An album subtitled "Darfur" isn't exactly meant to leave you grinning. This album wouldn't have surprised me even without the title, though, based on what little I know of Dixon's music. It's a powerful album. I liked it, but it's not something I'd put on for repeated listens in a short span of time.

Is that what Dixon was shooting for? I can't say. I do think the project works.

And as for that Victo concert ... check out Dixon's interpretation of the story in One Final Note.

Another nice inside-out set from this group, which includes Trummerflora (San Diego area) veterans Jason Robinson on sax and Nathan Hubbard on drums. Energetic and adventurous, although the more streched-out, slower pieces, like the title track, are probably the ones to really pay attention to. The group has played together for a long time, and it shows; the band paints cohesive pictures during its phases of loose group soloing.

A "funk and street brass band," fun stuff with tendancies towards New Orleans styles or '60s Latin/bossa nova kinds of sounds. The CD cover has the eight of them decked out in New Orleans masquerade ball finery, which pretty much sums up the attitude here. They remind me a little of the What Cheer? Brigade -- a Rhode Island band that's doing a sneak-attack show at Amnesia on Sunday the 20th -- but with a wilder side. Not that What Cheer? isn't fun -- they're a ton of fun, judging from the samples on their Web site -- but the Revolutionary Snake Ensemble is more like fun that's gonna get you into trouble.

Here, their take on "Que Sera Sera" is recognizable but upbeat, and packed with percussion (getting all Latin on us, of course).

Terraplane is Elliott Sharp's blues band, and while it does tap some of the downtown NYC and avant-garde guitar that Sharp is known for, Terraplane more often just piles on the Chicago-style blues like thick barbeque sauce. There's a great, traditional sound here, albeit with some songs that get political ("Katrina Blues/How the Crescent City Got Bleached," for instance). Fun stuff.

OK, so Pete Fountain isn't avant-garde. He's not even that hip -- his commercial break came at with the blessing of Lawrence Welk! But this kind of stuff is nice to slip into the show once in a while, especially since it lets us show off our vinyl collection -- and besides, Fountain is apparently a relative of one of my childhood friends.

The Blues was a gold album for Fountain, and part of a series of records released on Coral from 1959 to 1965. Its tracks consist of Fountain backed by a jazz orchestra -- so you get airy clarinet doodlings sharing time with big, loud, brass punches.

ECM's usual blend of the sublime and the experimental. This album includes lots of Norweigan folks who've gotten airplay on KZSU in the recent past, including Arve Henriksen (sax, from the groups Food and Supersilent) and Maja Ratkje (of Fe-Mail, a noisemaking fave of KZSU DJ Mike). It's a combination of Norweigan folk, done in slow atmospheric tones on instruments like accordion, with modern classical ideas and instruments.

Another nice one from a label that continues churning out worthwhile noise/improv disks. This one's mostly acoustic, with long tracks (four in the studio, one particularly long one live), mostly with drums and horns but in a definitely non-jazzlike context.

Considering I've been remiss at playing his music the past few years, and considering he's performing for SF Jazz in October, I've been thinking I should give Cecil Taylor his due. This is one of a few FMP albums that seem to have been recorded around the same time, during some kind of residency. This album has just Taylor on piano and Sommer on drums, spinning four terrific improvisations; many of the others feature Taylor leading large ensembles in hour-long pieces. These all came to us through the efforts of former KZSU music director Klee, and his hard work is very much appreciated.

Way too much about Dixon above. If you just want to read about this album, go here.

I want to draw comparisons to Jessica Bailiff, but I think this group is more like an artsy turn on goth. I shouldn't say that; there's little trace of goth rock here. You do get airy distant vocals or spoken word over ethereal washes of guitar or other sounds.

Previously noted here. This is an accordion solo, a bouncy/sad carnival style tune with some maddening 128th-note-or-worse sections, according to the sheet music sample accompanying the liner notes. Turns out those are just normal accordion runs and flairs; it's just that the base tempo is relatively slow. I'm still impressed, though.

Instrumental indie rock, in long waves of sound rushing over you. It's not an experimental-drone kind of sound, though; it's definitely upbeat, in a dreamy way. Too upbeat for the mood I wanted, actually.

A CD consisting of one monstrous 77-minute improvisation in one track. The core of this quintet is the Parker/Guy/Lytton trio: Evan Parker (sax), Barry Guy (bass), Paul Lytton (drums), a group that's operated together for something like 30 years and has been well documented on the Leo label. They're joined by two other giants of European jazz improv: Alexander von Schlippenbach (piano) and Paul Lovens (drums).

The track has its moments of sparseness and concentration, as you'd expect from anything 77 minutes long, and there are lots of delicious long spaces with fast but carefully measured playing -- busy, but not so much that the players blur into each other. Then again, when they decide to get noisy, they're plenty noisy. Great stuff from some masters of the genre.

Big fun, from a label that's often so serious. Baptista is best known as a percussionist for various John Zorn/Tzadik projects. This album is all over the map. It's a real treat. The base sound comes from middle-eastern musics, with heavy percussion of course, and there's a very "World music" feel to much of the album.

What makes it fun are the exceptions. This track is a crazy jazz parody, with some legitimate club-jazz jamming, surf guitar, and an interlude of random French 101 speaking and that stereotypical French "hoh-hoh-hohhhhh" laugh with lots of kissy sounds. It's just random, and quite funny.

I haven't even heard half this album yet, and I'd still recommend it.

For all its apparent Christianness, this track sounds more like something you'd call "repent" -- except that title was taken by the other track on here. "JC&S" is a 50-minute tour de force, with Gayle (backed by bass and drums IIRC) slashing, cutting, bobbing, and weaving for all his breath.

I was going to go out with this one, but the CD player hit a loop -- it kept revisiting one segment of the track, about 90 seconds long. Had to punt. That's one thing I won't miss about the CD format: Unlike vinyl LPs, not every CD will play in every CD player. That's carelessness to the point of consumer fraud, one might cynically say, and yet the record companies still wonder why everybody hates them. (I'm finding the same thing happening with DVDs.)