Back after a two-week hiatus. Didn't do anything on the music front. A weekend at Disneyland. (Interesting music? Ha! But at least "Small World" was shut down for renovations.) A trip to the Oregon Shakespeare Festival, where they're putting on a version of "Midsummer Night's Dream" that's WAY over the top. Shallow, yes -- but this is one of the most overdone plays in the canon, one that I wouldn't mind never seeing again, so it was fun to see the actors hamming it up. Big thumbs up. "Clay Cart" is awesome, too, and very ambitious.

Of note this week: 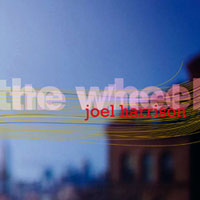 Joel Harrison's The Wheel is an ambitious project for double quartet (string quartet plus jazz quartet) and guitar (Harrison). This one really knocked the socks off DJ Fo, with its merging of modern classical ideas and dynamic modern jazz. The string sections crackle and sizzle, while the jazz side brings in the gently soaring lines Harrison has worked with his last few jazz albums.

I've been a fan of Harrison's work for about 10 years. He used to live in the Bay Area and played all the avant/improv haunts with his jazz compositions, accessible but complex stuff with an ear for open-ended soloing. His song "Jerusalem" spurred a fantastic violin solo from Carla Kihlstedt at one show I recall. But he was also working on experimental turf at the

Getting back to "The Wheel," it's easy to divide it between the "jazz" and "classical" halves in each song, but of course Harrison muddies it up by giving solos to some of the string players. There's a nice violin turn on the gentle, sad "We Have Been the Victims of a Broke Promise," for instance. Harrison says the piece is possible only because enough classicly trained musicians these days are able to improvise and cut loose in these kinds of contexts. "Only 20 years ago, this piece would have been practically inconceivable," he writes in the liner notes.

As for where the music comes from, Harrison's liner-note introduction sums it up: "When jazz gets tiresome (too much soloing and predictable textures and form), and classical usic gets stodgy and monolithic, I dream up pieces that try to incorporate my favorite aspects of both." The string quartet might feel heavy-handed to some jazz ears, and some of the more "classical" passages do stand out inorganically. But in Harrison's ears, it all blends perfectly (just like the sore-thumb pop songs in my show don't sound out of place to me). It's worth listening to this suite on Harrison's terms. It's terific stuff, and the concluding movement is frenetic and exciting.

A 46-minute piece to open the show. This was originally featured on the actual Memory Select album, played by the quintet version of Bloodcount -- snippets of which found their way onto my 10th anniversary show. Here, the whole thing gets a full-band treatment. Open, Coma is a 2-CD set of just four long tracks, three of them previously released on Berne's albums, and it's loads of fun, packed with darting solos and a professional sound. It's not one to miss if you enjoy Berne's music.

Squirrelly free-jazz piece taken from the album, Desert Songs and Other Landscapes.

Piano and woodwind duets (Bob and Ellen, respectively) in a chamber/improv setting. Definitely informed by classical music but with a subversive edge to it, here and there, and of course some crazed free-jazz soloing. It's like serious music gone not-so-serious. "His Lucent Empire" happens to be a solo piano track.

Swing, big band, and R&B mixed together to celebrate the cultural intersections that dot across Harlem. There's some genre-crossing fun, too. Cab Calloway's "Reefer Man" becomes a bouncy Latin piece. "Think" actually gets a harder funk backing. The Andrews Sisters' "To Me Your Beautiful" gets recast closer to its Yiddish roots as "Bei Mist Bist Du Shoen," with Don Byron on Klezmer clarinet. There's even a fully improvised track, in the style of "Bitches Brew," that opens with a bit of Malcolm X. And it's all presented in the guise of an imaginary radio station.

He's known these days as Ani DiFranco's bassist, but Todd Sickafoose was part of the Bay Area jazz scene for a while and has put out a few intersting albums as a leader. The DiFranco influence seems to have seeped into his blood, as this album features languid instrumentals with chiming guitars. It's definitely jazz, though, with some snappy horn lines that add a touch of funk and keep the songs from being too sleepy. Very interesting stuff. I'm reminded at times of Jim Black's Alas No Axis.

I've got this band's first album, which was recorded live in some kind of church and features long, lingering, echoey passages. This, the first studio album from the two-saxophone quartet, seems like a more direct take on free jazz, with a brighter sound. In both cases, I like what these guys have put together. The tracks in both cases are fairly long (10 minutes); I'll have to find a pairing that showcases each album well.

* Mute Socialite -- "Chicago! Chicago! (You Wake Me Up In The Morning)" -- More Popular Than Presidents and Generals (Dephine Knormal, 2008)

More sample-art/noise from the good folks at Gigante. It seems to be a tribute to (or the inspirational product of) cool '70s record collections, with lots of funk and soul samples alongside cheesy TV samples. The combination's made this a fast favorite among the staff.

A mashup of modernized world music with some jazz or rock ideas. This track's got a mellow new-age sheen to it, but I could resist the liner notes description of an 11/4 theme derived from Indian music.

Kareem is the bassist for Mute Socialite, noted above, and plays a heavy and possibly metal-influenced hand for them. Here, he's the composer of a very slow, lingering piece that's heavy on vibraphone (played by Shayna Dunkelman, another Mute Socialiteite), for a drifting atmosphere.

The album in general is a collection of Mills College student material. Most of it is in the electronics/noise vein, although Aram Shelton contributed an 11-minute rollicking percussion piece with some jazz horns, which I'll have to try out soon.

While it's not meant to be a showcase for Minton, it's hard not to feel his vocal improvising moving to center stage. This is obviously from a tour of Japan, as it's a Japanese release with three Japanese jazz musicians. Lots of extended technique and extra-musical sounds abound; definitely comes from the abstract improv camp.

Dijkstra is a saxophonist, but here he's found on all manner of implements, mostly electronics. Hollenbeck sticks to drums and various other percussion. There's a wide range of sound on here, adding up to a kind of sci-fi potpourri, or maybe a choppier, edgier new age, as I wrote in my station review two years ago.

Dijkstra splits his time between Massachusetts and Denmark, and he's out in the Bay Area frequently. We'll be hearing more from him.

A rush of percussion, interrupted here and there by chamber orchestra. Includes a lot of indigenous percussion, probably from Maceda's native Philippines.

Played as part of a promo/ticket giveaway for a massive festival being held in Golden Gate Park later this month. Mostly "alt-rock" stuff but with a few interesting acts like Manu Chao and Kaki King.

It's King's solo guitar playing that really caught our ears at the station a few years ago. She's added songs here, for a lush folky touch, but the intricate guitar work is in there as well. 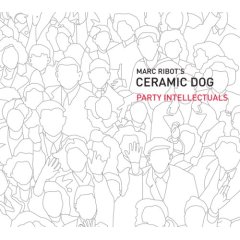 Yow. A noisy garage-rock band, but one that includes Ribot's dabblings with Latin/Cuban music, and a knowledge of jazz, and tons of noisy, clattery improv subtly dotting the backgrounds of many songs. Fun stuff with deadpan vocals. The noisy cover of "Break on Through" lets you know part of what you're in for, but the album features lots of twists and turns along the way. The title track gets nice and loud, even funky, with a croud shout of "Party! Intellectuals!" serving as a battle cry. Fun.

The trio includes Shahzad Ismaily of 2 Foot Yard, by the way. Check the bottom of Ismaily's bio on the Pi Recordings site for some blog entries with cool Web links, including an NPR review of the album.

An ambitious 16-piece band recorded at last year's Vision Festival. Includes lyrics sung by Indian classical vocalist Sangeeta Bandyopadhyay, as noted here. I want to give this one a deeper listen before commenting, especially since the album mostly consists of three long tracks, but what I've heard so far sounds joyous.