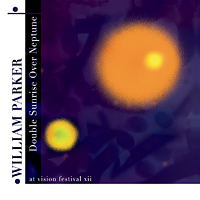 William Parker has done plenty of large-group work, but Double Sunrise over Neptune seems particularly ambitious, consisting of glorious long jams with an exciting, patient pulse and a spiritual mood driven by the vocals of Indian classical singer Sangeeta Bandyopadhyay. It's an amazing work.

"Morning Mantra" and "Neptune's Mirror" are separate readings of the same movement, a piece that ebbs and flows in subtle waves, anchored by a six-note mantra of a bass riff that persists until the final minutes. Parker, conducting, cues soloists and background improvisers from the 16-piece band to create textures that fade in and out of focus, with horns coloring the sound here; violin/viola or guitar taking over elsewhere. Some of these snippets sound composed, or maybe Parker conducted them into being on the spot. The two versions differ substantially in mood although they seem to draw from the same strategic map; for instance, both end with some sublime improvising after the bassline stops.

Bandyopadhyay's voice becomes the center of attention on both tracks, as she either serenely improvises or sings the lyrics penned by Parker: "We are all facing the wind; may we be filled with light..." Her singing, in the long, lilting syllables of classical Indian styles, is the centerpiece, and it defines and grounds the mood and method of the piece.

It's a jam with a spiritual feel, with Parker artfully coaxing and sculpting the sound. His own instrumental contributions come not on bass, but on some exotic horns and the eight-stringed doson'ngoni.

Those pieces bracket a longer movement, "Lights of Lake George," that continues the mantra feel with a different central rhythm and riff. Here, Bandyopadhyay contributes the Surya Pranam mantra, "which glorifies the rising sun and pays homage to the Sun as God," or so say her liner notes. She also sings a tarana, an improvisation based on Persian devotional symbols. It's a clear and passionate work, with the added treat of some composed group lines that add ragged edges around the mantra bassline and serve as the kicking-off point for some crazed, stabbing improvising late in the piece.

Together, the pieces form a nearly continuous suite, although I don't know if it's intended that way; technical difficulties during the original live recording had the band reconvening the next day, and I'm not sure which pieces came from which performance. Stuck between the pages is a 37-second snippet of "O'Neal's Bridge," which sounds like it's got roots in Parker's more traditional jazz side.

Parker is a giant of modern jazz, and he's outdone himself with Neptune. If it's truly all part of one gigantic suite, then I'd love to see it all live someday. Now if someone would only finance a tour for this group, or for the Little Huey Orchestra for that matter...

Elsewhere in the week: