Odd start times due to a variety of factors. Our regular afternoon DJ is out on quarter break, and I had to leave early. 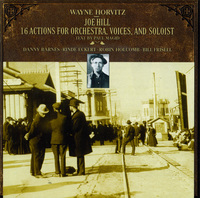 It's not your ordinary collection of songs. Wayne Horvitz has put together a theater piece, kind of like a radio play, based on the life of union organizer Joe Hill, who was executed in 1915 for murder after a controversial trial. The trial is the setting of this play, but it's not the focus. This is a play about the harsh realities of labor in the early 1900s, and what Hill and his successors did to make our, better, lives possible today.

Each scene (or "action," as Horvitz labels them) combines cinema-soundtrack strings; spoken dialogue and monologue sections; and traditional 1900s folk/protest songs, with a symphonic backing that's just this shade of Broadway. The "band" includes a symphony, three vocalists (including Horvitz's wife Robin Holcomb, whose twangy voice is a perfect fit), and soloist Bill Frisell on guitar. The mood can be uplifting despite the heavy, sad nature of the story. It's quite professionally done.

The story dwells not only on laborers' wretched conditions circa 1915, but on how they used religion to cope -- and how Hill tried to shatter that passive mode of thinking. To him (according to this telling), it was imperative to take action for one's own interests, rather than just waiting for Christian promises of a better hereafter. Call it Marxist if you must, but the libretto tries to make it clear that the things we now take for granted (weekends, for instance) came from the sacrifices of people like Hill. You don't have to love unions now to appreciate how their past work created the foundation for what we flippantly call "having a life."

Of course, the trial figures into the storytelling. There's no doubt Hill was convicted for his political leanings, with the evidence being secondary and probably rigged. Even in 1915, people saw through this; Woodrow Wilson apparently appealed on Hill's behalf, to no avail. (While much has been made of the shakiness of the evidence and of the iron-clad alibi Hill supposedly refused to use, the liner notes to this CD point out that there's an outside chance he really did do it.)

Lest you think the whole project (which was commissioned by Earshot Jazz for a live performance) is a simple case of Horvitz propping up Hill's legend, you should check out this essay, which describes some of the thought processes behind this piece.